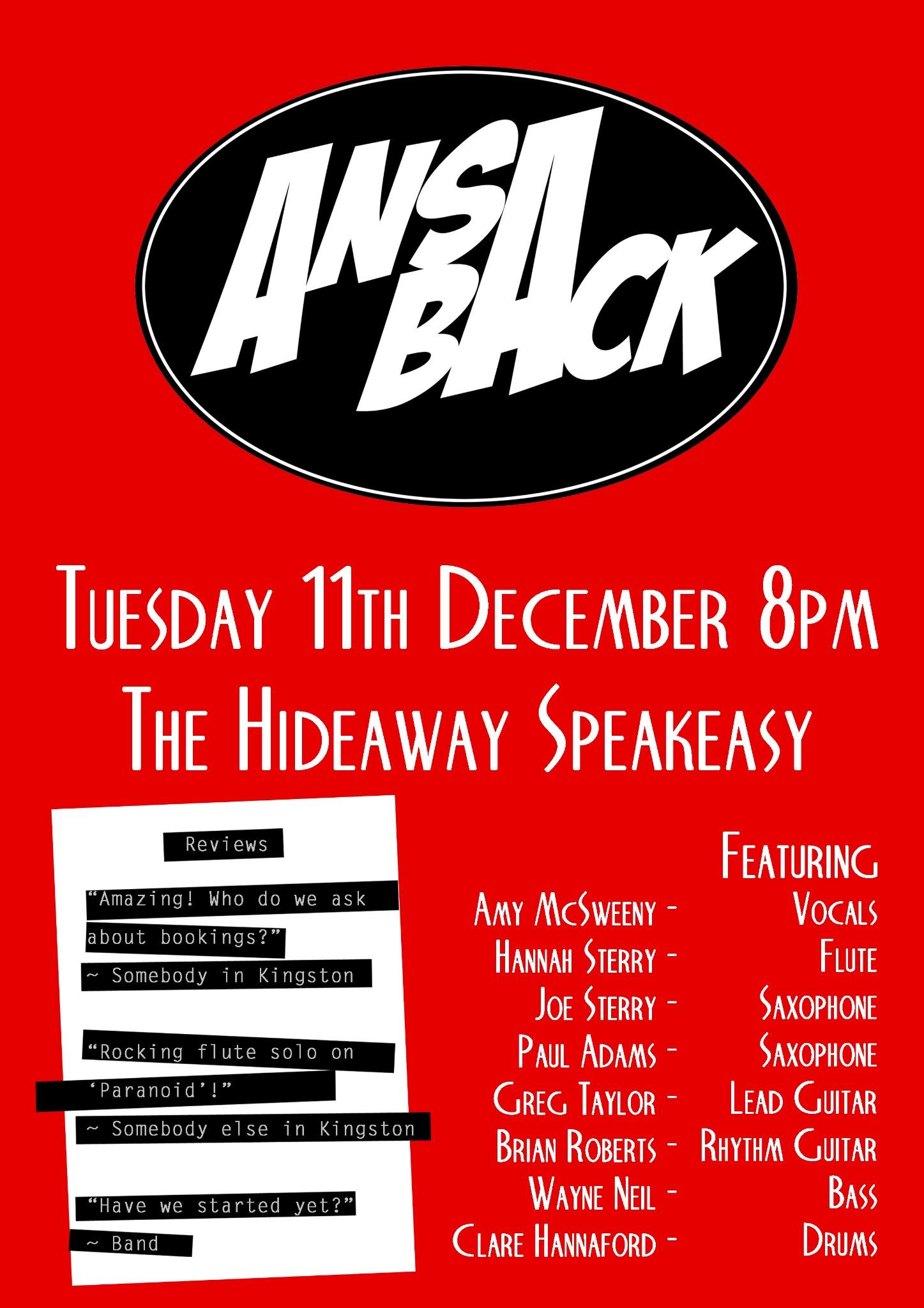 There is now a Sterry Cartoons Group over on facebook.

So feel free to hang out over there and share in the friendly banter!

I’ll post the occasional cartoon and we can all have a bit of a laugh.

There are a few gigs coming up in December, where I’ll be performing as guest jazz flautist with Hamer & Isaacs gypsy swing band. They’re a brilliant group of musicians playing lively Django-style jazz and really good fun to watch, so if you get a chance to see them – Don’t miss it!

The dates I’ll be joining Hamer & Isaacs are:

They’re playing a lot of dates in Devon and Cornwall in December, so it’s well worth having a look on their shows page to see if they’re playing anywhere near you.

Also remade the header photo for the website (below). What do you think?

The 25th of September marks the last Tuesday Night is Music Night of this year and I just want to say a huge thank you to everyone at The Cottage Hotel, on behalf of The Sterrys, because we’ve had an amazing time.

It’s been great fun playing at The Cottage Hotel every week this summer and we’ve met some wonderful people, tasted some absolutely amazing food and really enjoyed playing to such a nice group of people.

Here are a few photos to sum up the wonderful time we’ve had here:

Having fun with the folk harp (sometimes accompanied by Joe on flute).

Fundraising for Hope Cove Lifeboat out on the terrace.

I’m not sure how much we raised, but have been told it was a success!

We even had time for a quick photo opportunity as the sun was setting!

In summary, we’ve had an absolutely amazing time with everyone who’s visited or worked at the hotel.

This is probably the best way to illustrate it:

Thank you to everyone who’s come and supported us,

I really hope you’ve enjoyed it as much as we have!

Yes, I have some more music cartoons for you and they’ll be available in my shop shortly (when I get round to it). There are more over on Sterry Cartoons facebook page.

In the meantime, it’s been an exciting few weeks and I haven’t blogged much, so here’s what’s been happening recently:

The Sterrys live music for Tuesday Night is Music Night at The Cottage Hotel have been a great success and we’ve been asked to continue through September! Earlier in August we (Hannah and John Sterry) also played there to raise money for Hope Cove Lifeboat and someone was kind enough to to take this photo:

It was a wonderful place to play, partly because the weather was so amazing and I managed to get a picture of the view from the terrace. It’s really lovely on sunny evenings on the Tuesday nights, because as we’re playing we can watch the sun setting over the sea – it’s beautiful.

I’m finally learning to drive after years of putting it off because of university and moving!

The Boyfriend Song now has a much better delivery and set of chords and I need to practice it to perfection!

My SketchBook is filling up really quickly and I’ve been talking to a local animator about possibly animating some of my cartoons!

Anyway… that’ll do for today, but I’ll keep you updated as this all progresses (when I find time to blog, that is).

Feel free to ask me any questions or just have a nice chat in the comments! 🙂

Tuesday Night is Music Night at the Cottage Hotel. I’ll be playing flute as part of The Sterrys and watching the sun setting over the water at Hope Cove. Feel free to relax with a cocktail and enjoy the music! Starts at 6:45pm.

Wednesday… brings the second of Ben Carr’s Music Sessions at The Hideaway. Anyone can come along, bring an instrument and join in (I’ll be there with my flute). The whole evening’s great fun and you’ll meet some really nice people. Starts at 8pm.

Thursday… features An audience with Auntie Pus at B-Bar, Plymouth. I’m really hoping to go to this, but haven’t quite worked out the logistics yet. Either way, I’m sure it’ll be a brilliant evening. Starts at 8:30pm.

Sunday… Gallows Ghost play The Hideaway and have asked me if I’d like to stand in for a few tunes as a guest musician. They’re lovely people and their music is great fun to play, so the answer is always yes!

Today’s discovery is… a new instrument called The Fluid Piano. The strings all have sliders that enable each note to be changed in pitch (by up to a whole tone) as the piano is being played. This also means that the piano can be tuned to the true harmonic series, making it much more compatible with traditional indian  music, which doesn’t use the standard western tuning (twelve note equal temperament) and can often involve fluctuations in pitch.

Anyway, I hope you’re all having a good week and if you happen to be at any of these gigs, feel free to say hi (I’ll be the one with the flute and the long brown hair)!

Tuesday Night is Music Night at The Cottage Hotel has been a great succes, and was particularly lovely today, as we [The Sterrys] arrived to the sun shining and played until we saw it setting over the sea. Here are the photos from the evening:

John and Joe setting up in the sun.

John suddenly turns in to a giant while Joe and Hannah aren’t looking.

The evening ended with this…

…and we couldn’t be happier.

It’s been a thoroughly enjoyable, musical week with lots of things happening, but here are the highlights:

Tuesday: John Sterry (pianist for The Sterrys) entertained guests and visitors to The Cottage Hotel with a relaxed evening of jazz piano.

Wednesday: Ben Carr hosted his first Blues Session in The Hideaway Speakeasy, which turned out to be an amazing success! The atmosphere was wonderful and it was good to see musicians who’d never met just getting up and joining in (at one point Ian Feetenby jumped in and provided us with some brilliantly spontaneous percussion on acoustic guitar). The next session is on Wednesday 8th August – Feel free to come along and enjoy the music or, better still, bring an instrument and join in! We’re all friendly, I promise!

Friday: Hamer & Isaacs played The B-Bar in Plymouth and were kind enough to ask me to step in as a guest musician on their second set. What followed was a foot-tapping extravaganza of swinging gypsy jazz with one of the liveliest audiences I’ve ever played to! I think everyone left that gig with a huge smile.

This is what my diary has looked like for the past few weeks:

7th May – Recorded some improvisations with Stephen Abrehart, just to see how the harp and baritone guitar worked together. The sounds mixed brilliantly and I hope we’ll be able to record a few more things together in the future.

10th May – Saw Ben Carr play at The Refectory Bar, sampled some delicious cocktails (the Apple Crumble cocktail was really good) and joined in with some jazz flute for the last few songs.

19th May – The Sterrys (John, Joe and I) played music for a surprise birthday party in Malborough Baptist Church.

That afternoon we also went to the Cottage Hotel to discuss their plans for music throughout the summer, which led to this:

I am delighted to say that from June 5th, The Sterrys will be playing at The Cottage Hotel every Tuesday throughout the summer. The line up will change week-to-week; one week might be solo piano, the next a jazz trio with flute and harp the week after that…

Anyway, we expect it’ll be a lot of fun and hope to see you there!

Hamer & Isaacs played a really energetic set at the Millbrook Inn earlier on Sunday afternoon. They play gypsy jazz with a sound reminiscent of Django Reinhardt and Hot Club of France and were kind enough to let me stand in as guest flautist on one or two tunes! When I wasn’t playing I found the time to take a few photos and videos. Here’s how they turned out:

The gig was brilliant!

Everyone had a lot of fun and there was smiling…

And even some dancing (I’m attempting to upload the video now, but Devonian internet is a little bit temperamental).

The whole afternoon was a lot of fun and the atmosphere was really relaxed and welcoming. I thoroughly enjoyed playing and listening to the music and hope I have plenty of chances to see the band again!