I am musician, cartoonist and UX specialist based in Devon, UK.

I grew up in the very rural South Hams, with a biochemist mother and mechanical engineer father so I’ve ended up being a bit of a geek. During the day I am a UX manager and design software that gets used by millions of people, then on the evenings and weekends I play music and draw cartoons. 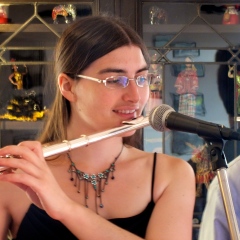 Available for work as a flautist and session musician, I enjoy working with with all sorts bands and musicians, covering musical genres from gypsy jazz and folk to rock and heavy metal. Musicians I have worked with include The Sterrys, Hamer & Isaacs gypsy swing band, The Hot Club of Stonehouse, Becky Brine,  Ben Carr, Ansa Back and Gallows Ghost.

I have a BSc (Hons) Open in Music, Mathematics and Engineering from The Open University, ABRSM Flute (Grade 8) and hope to complete a Diploma in Flute Performance in the near future. 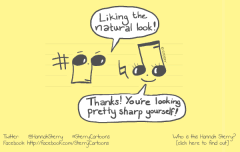 An interest in illustration and comedy led to the creation of Sterry Cartoons (a webcomic featuring educational music jokes and animal-related humour).

Sterry Cartoons has received a great deal of interest online, partly due to the viral success of Musical Compliments (a cartoon featuring a joke about naturals and sharps).
The Musical Compliments cartoon has been shared over 25,000 times on facebook and has been featured by BuzzFeed and ABRSM.

For more cartoons, visit the Sterry  Cartoons Facebook and shop! 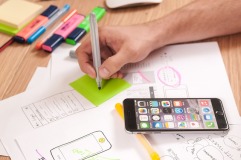 I am one of the Women in STEM (Science, Technology, Engineering and Maths) that you keep hearing about.

I work as a UX Manager for a small software company, with a brilliant team of developers and testers. We are all constantly learning and we strive to create products that our customers will love.

Here’s to crawling around on hands and knees, creeping up on bugs and bees! Or something like that.

More of my images can be seen on Redbubble.

62 thoughts on “Who is Hannah Sterry?”