The Snail Clef – A new cartoon by Hannah Sterry. 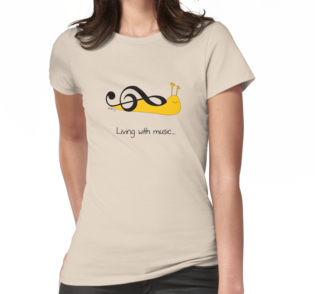 Silly misunderstanding of the week:

“Yesterday I was asked to watch the chickens, so I wandered outside. Apparently the one I was meant to watch was already in the oven.”

We have a few broody hens and an escape artist cockerel, so it didn’t seem like a particularly strange request at the time. They probably wouldn’t escape so much if we clipped their wings but that generally only happens shortly after they’ve escaped, eaten all of the seedlings and terrorised the cats.

The chicken in the oven came out with a nice tan! 😛

This is the very first cartoon I ever created and now you can buy it on all sorts of things in my Zazzle store!

As far as I can remember, the idea for this cartoon was sparked by a chat with a lovely friend (singer and teacher Sarah Barnett). We were wondering whether it would be possible to make smiley faces out of music notes. I got a little bit obsessed and eventually came up with these.

The music puns followed on naturally and made a few friends smile, so they stayed. 🙂

Here are just a few of the products I’ve made so far. They’d probably make great gifts for your musician friends and music teachers, or (if you’re anything like me) you might just want to treat yourself because it makes you giggle. There are all sorts of products to choose from (not just these ones), so if you want to see the whole range have a look over here (Zazzle Shop).

Sterry Cartoons is a webcomic featuring educational music jokes and animal-related humour. The comic has received a great deal of interest online, partially due to the viral success of Musical Compliments (a cartoon featuring a joke about naturals and sharps), which has been shared by over 20,000 people worldwide.

I got a tablet yesterday, so I’ve been trying to re-draw my old cartoons and had a few new ideas along the way. Anyway… here’s the new digital version of the Musical Compliments cartoon. Hope it makes a few of you music teachers and students chuckle! 😀

“Thanks! You’re looking pretty sharp yourself!”